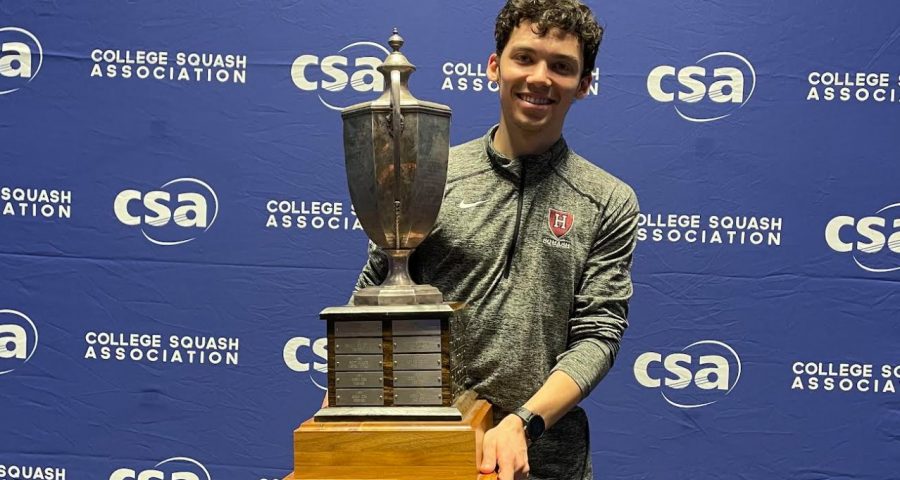 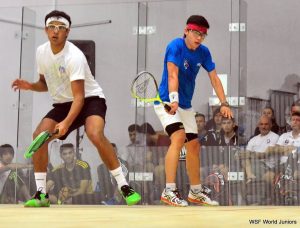 Crouin and Ibrahim in the 2016 World Juniors in Poland

Ibrahim had beaten the ElShorbagy brothers Mohamed and Marwan on the way to the Chicago final, where he won the opening two games against the new world number one, the reigning Canary Wharf champion Paul Coll.

The New Zealander squeezed home 11-9 in the fifth but Ibrahim had certainly announced his presence on the world stage.

World No.17 Ibrahim and No.21 Crouin produced a similarly enthralling battle in the College final at the new Arlen Specter National Squash Center in Philadelphia.

Ibrahim was first to match ball at 10-9 in the fifth but Crouin showed nerves of steel to win three crucial points in a row.

As he prepared to fly to England for the Canary Wharf Classic, where he faces wild card Josh Masters in the opening contest of Sunday’s first round, Crouin said: 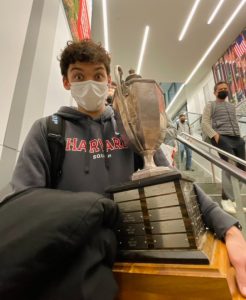 “This win means a lot to me and the match in itself was of great quality.

“Besides really enjoying the match with Youssef, I am proud to have come through the last few rallies at the top and to have won the title for the second time. Youssef was the first to secure a match ball at 10-9 and I eventually won the next three rallies.

“I really could not have asked for a better way to end my college career with Harvard, winning both the National Team and Individual Championship with my team.

“I feel fortunate and grateful to have been an active member of Harvard Squash and I am looking forward to closing this incredible chapter and opening a new one in a few months with a 10-plus year professional squash career ahead of me.” 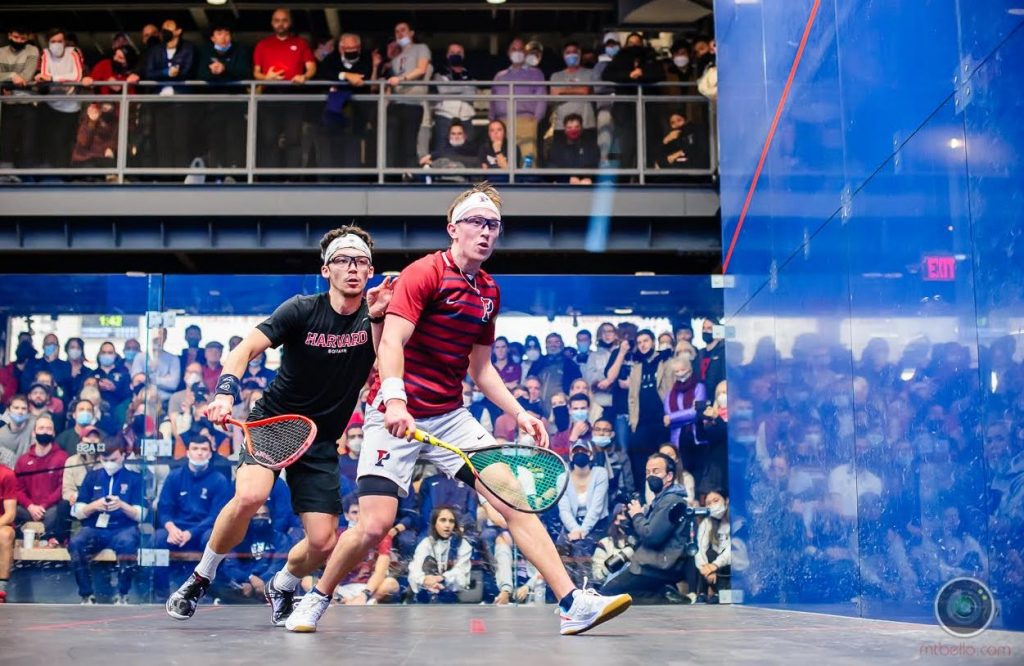 Crouin will finish his course at Harvard in a few months with an exceptional record: three out of three national titles in the team event (the 2020 edition did not take place) and now a second win in the individuals.

In the team competition, Harvard beat Penn 5-4 in the decider, with Victor fighting back from two games to beat Andrew Douglas 12-10 in the fifth in a crucial tie.

1: Victor, welcome to Canary Wharf for your first appearance on court at the wonderful East Wintergarden. You must be looking forward to it! 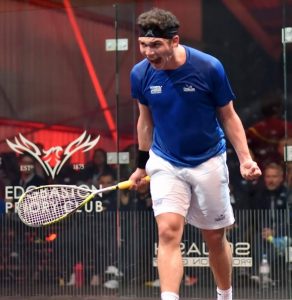 I am really looking forward to playing Canary Wharf for the first time ever. It is only since the Covid era and my rise into the top 30 of the PSA World ranking that I have been able to regularly play on the big stage, and more particularly Silver and Gold events. In contrast with Platinum tournaments, Gold events are often run and organised on a smaller scale which allows organisers to take greater care of the players, so I am looking forward to being there.

2: You and Josh Masters get the tournament under way with the opening match on Sunday March 13. I don’t think you and Josh have played before. What do you know about him?

I have never been on a court with Josh but I know him a little bit from our junior days. I believe he is a few years older than me, so I would usually watch him and the other older junior players to learn from them while I was growing up. I know he has not been lucky during his professional career with some injuries along the way. However, he has always been a very skilful player and I am interested to see how I will be able to counter his game on that day.

3: What have the other players told you about the atmosphere at the East Wintergarden?

I have heard great things from both players and spectators about the event and from what I could see on watching on SquashTV, the venue looks amazing with the fans being really close to the glass court, so I can’t wait to experience what it’s like in a few weeks. We are playing the opening match, so hopefully the English crowd will only be warming up for the later matches and thus won’t be too loud cheering for my opponent!

4: The prize for the winner is a place in the second round against Paul Coll, who will defend his title as the new world No.1. I’m guessing that Paul’s rise to the top of the rankings must serve as a huge inspiration for younger players like yourself. 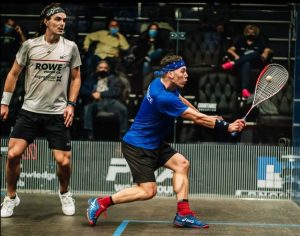 Paul’s rise to the top of the rankings is inspirational in many ways, as he was never one of the top juniors that squash fans and coaches would have predicted to be at the top of the game one day. His hard work ethic is one of a kind but more than that, he is also a very smart athlete.

I have played him multiple times the past two seasons and one thing that really struck me was how he was able to improve and add something to his game and tactic each time we played each other. While I felt I was playing better, he was also playing better squash and the score was always a 3-0 win to him. As the title defender and the new world No.1, it will be interesting to see how he handles the competition and I would be happy to be the “trouble-maker” if I manage to first get through Josh in the first round.

5: Paul earned the nickname of Superman for his diving at Canary Wharf, and we also have Miguel Rodriguez in action on Sunday against James Willstrop. What are your diving skills like?

My diving skills are negative! Diving is definitely not part of my game. Let’s just say I feel much more comfortable with both legs firmly on the ground and diving is just not part of my personality.

6: Please tell us about your preferred style of play? 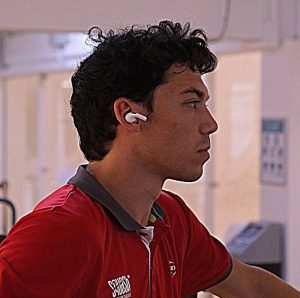 When I grew up, Jonathan Power, Thierry Lincou, Nick Matthew, and Greg Gaultier were my four favourite role models. I am very much a player that enjoys moving the ball around using the four corners of the court. For this matter, my movement is a big part of my game. Despite (or maybe in spite of it?). I enjoy having a certain presence on the T, which allows me to intercept and volley as much as possible.

7: Like Ali Farag, you have enjoyed leading the Harvard men’s squash team in the US College League, and you guys won the College title by beating Penn with you grabbing a win over Andrew Douglas from two games down before clinching it 12-10 in the fifth. Please share a few of the highlights from your time in the States.

Well, the Harvard Men’s Squash Team just secured its third consecutive national title beating Penn in a contested final at their home courts. It has to be one of my highlights of college squash with the team for multiple reasons. First, we had lost a month earlier in the regular season and they were looking very strong top to bottom, so to turn things around and sneak five matches en route to victory was a big performance. Second, it was our first season back after a hiatus in 2021 during the Covid era and so, a few of my teammates had taken a gap year in order to compete in their last season for Harvard. 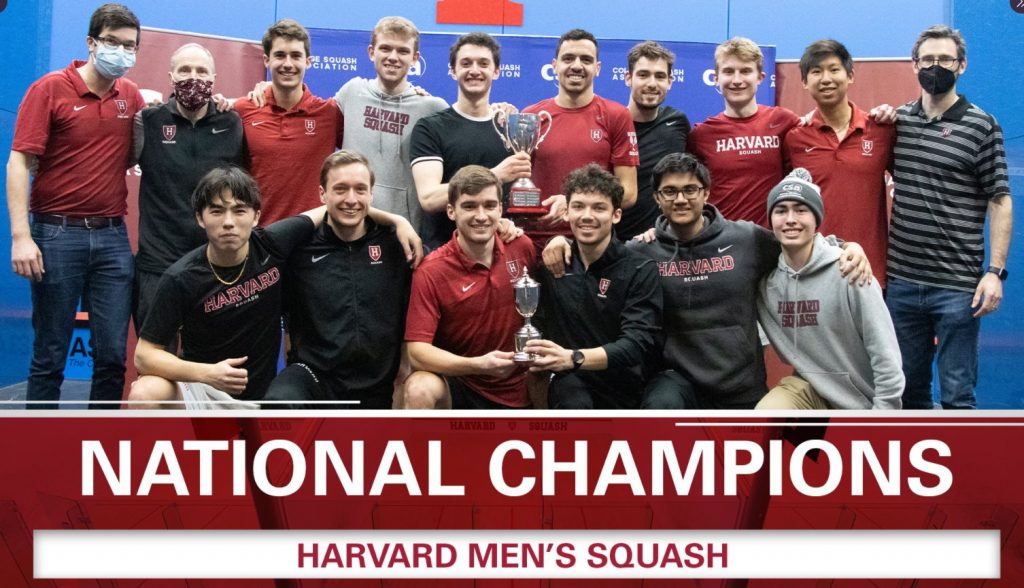 It was therefore really cool to be back competing in college squash and for seniors – like myself – to win our last ever college match for the team. It might sound cliche but every bus ride with the team can be recorded as a highlight of my time in the States. We spent so much time all together helping each other out for our academics, sharing meals together, training, and travelling that it is fair to say that Harvard Squash – and more particularly those whom I crossed the road with during my four years – is a second family to me.

8: Harvard coach Mike Way is a great guy and a hugely successful coach. What have you enjoyed most about working with Mike? 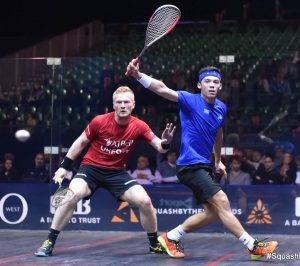 Like all the coaches I have worked with, he has been very helpful in helping me explore and master new shots that he considers an important part of the game. We discussed technique and tactics, of course, but what I appreciated most about Mike was his ability to draw attention to the importance of the mental aspect of the game. Mike’s job is to be a successful team coach before all and so he cares a lot about the culture of the team and how his players behave on and off the court, in training and in competition.

Ultimately, he taught me to be a better person and a better teammate, and that is the most valuable thing I will take away from our four-year relationship (although there is no doubt that this relationship will not end here).

9: Now you are about to finish college and can look forward to playing full time, please tell us about your coaching team and your professional base.

I still have a few months before I graduate and obtain my bachelor degree. Next year, you will be able to call me a full time professional player! Joking aside, I will be returning home to France where I grew up and continue to work closely with my dad, who happens to be my all-time coach. My hometown is an hour’s drive away from Aix-en-Provence where most of the best French players train every day, so I will definitely train with them once or twice a week when I don’t travel and compete on the professional stage.

10: Congratulations on reaching the world top 20 in January after winning the Squash On Fire Open last June, beating James Willstrop in the final in Washington, and you also won the Houston Open back in October, beating Asim Khan in the final for your fifth PSA title of 2021. How is your current form? 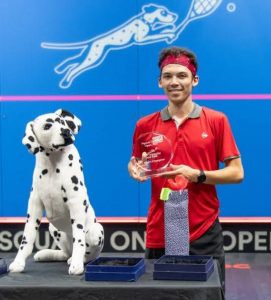 Since January, I have been busy competing with Harvard Squash in the College Squash League and have played some good squash overall. More recently, I lost in the first round of Windy City Open 2022 and am looking forward to getting back in form for Canary Wharf in a few weeks.

In 2022, I want to stay in the top 25 before becoming a full-time professional. One of my goals is to make the quarter finals of a Platinum event.

Thank you, Victor, and good luck at Canary Wharf 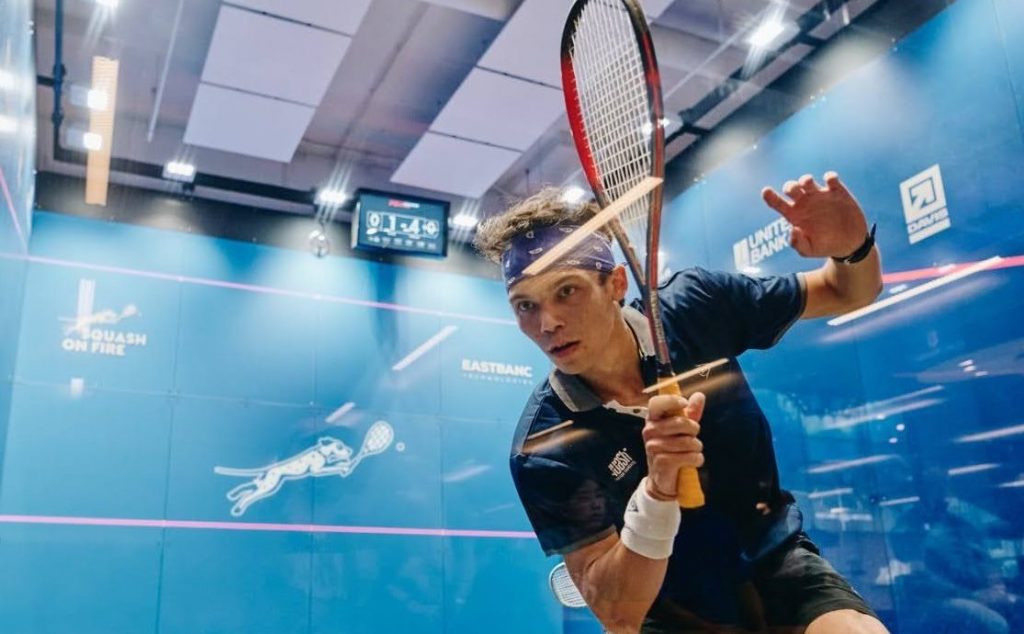 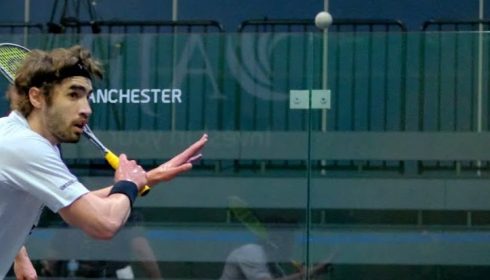