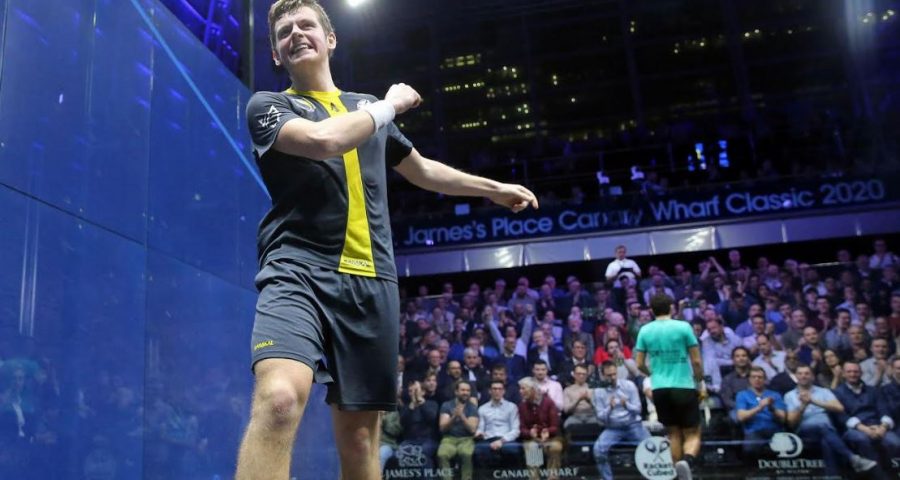 As usual you can Watch Live via SquashTV, follow the updates on Live Scoring and our Twitter Feed, and we’ll have match reports here.

Marwan through as Mosaad retires

Marwan ElShorbagy is through to the quarter finals after beating Omar Mosaad in a match overshadowed by a nasty injury to his opponent.

The Hammer of Thor rolled his ankle at 4-6 down in the third game, causing him to collide with the sidewall.

PSA physio Derek Ryan came on court to treat the 6ft 4in Egyptian during a 15-minute injury break.

He bravely came back on court, but was unable to continue and had to forfeit the match. Marwan had earlier fought back after losing the first game 2-11 to take the second 11-6.

He appeared to be in control when his opponent’s injury happened.

Best ever win for Lobban

Greg Lobban pulled off the biggest victory of his career as he beat world number 4 Abdel Gawad to make the quarter finals of the Canary Wharf Classic.

He had lost their six previous meetings, but used his electric movement as he outfought his opponent on the way to an 11-7, 11-9 win in just 36 minutes.

It was sweet revenge for the Scotsman, who was beaten by the Egyptian in the final of last month’s Edinburgh SC Open.

But buoyed by recent victories against Daryl Selby and Paul Coll, the 27-year-old – being coached by England legend Nick Matthew – showed why is now a major threat to the top players.

Speaking after his victory, he said: “Karim is one of the best strikers of the squash ball in the world so a result like that means a lot.”

He may have lost the number one ranking last month, but there is no doubting the Egyptian’s determination to regain the top spot and he used guile and flair to win a series of physical rallies that saw him taste victory 11-6, 11-3.

The Dark Knight had pushed Fearless Farag to four games in each of their three previous encounters, but despite his best efforts was never allowed to get a foothold in the game.

The front left nick of the glass court should be renamed the Fares Dessouky corner after a succession of stunning crosscourt volley kills made the difference in this battle between two players ranked 11 and 12 in the world.

The 25-year-old stepped up the pace after losing the opening game 8-11 and his all out attacking strategy paid dividends as he took the next two games 11-7, 11-5 to wrap up victory in 42 minutes.

Abouelghar started brightly and treated the crowd to some creative winners of his own, as both players delivered another high-paced spectacle.

The Egyptian found that any crosscourt provided cannon fodder for Dessouky’s stunning volleys.

The winner admitted afterwards: “I had to change my tactics after the first game and I’m glad it paid off.

“It’s always a tough close game against Mohamed and I’m very relieved to be through.”

The quarter finals promises to be another mouth-watering attacking spree with five Egyptians, a Peruvian, an Indian, and a lone Scotsman in the mix.