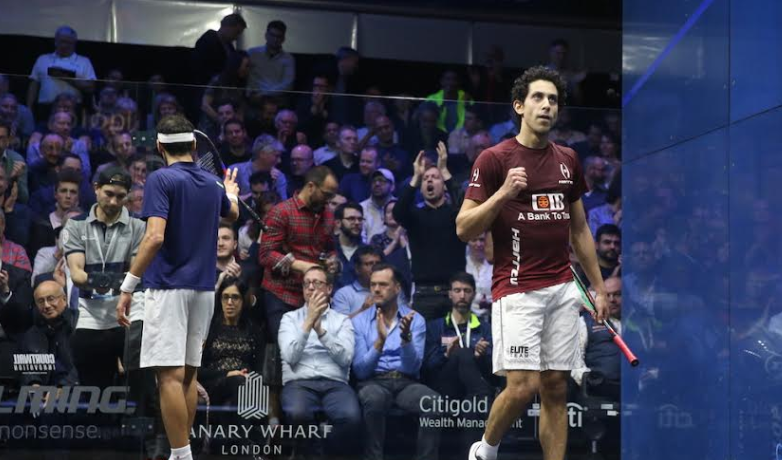 World Champion Tarek Momen has been handed a tricky second round tie against either the in-form Joel Makin or local favourite Daryl Selby after the draw for the St. James’s Place Canary Wharf Classic – taking place from 8th to 13th March in London’s iconic East Wintergarden – was released today.

Momen has finished as runner-up at this tournament on two occasions, first to World No.1 Mohamed ElShorbagy in 2018 and then to New Zealand’s Paul Coll last year. However, the World No.3 avenged that defeat to Coll in November 2019 as he got his hands on the biggest trophy in men’s squash – the PSA World Championship – and he will look to make it third time lucky this time around at the PSA World Tour Gold tournament.

Momen is predicted to come up against World No.11 Makin in round two and will need to end a two-match losing streak to the Welshman after defeats in November’s CIB Egyptian Squash Open and in December’s WSF Men’s World Team Squash Championship.

The winner of that match is seeded to play the dangerous World No.7 Diego Elias in the quarter-finals, while ElShorbagy could lie in wait in the semi-finals.

The bottom half of the draw sees World No.2 Ali Farag pitted against the winner of an all-English battle between Adrian Waller and Declan James.

He will need to come through a field that contains former World No.1 Karim Abdel Gawad, 2017 World Championship runner-up Marwan ElShorbagy and 2018-19 PSA World Tour Finals runner-up Mohamed Abouelghar if he is to reach a first Canary Wharf Classic final.

There are six Englishman involved in the draw, with four-time British Champion James Willstrop taking on tournament wildcard Richie Fallows in round one, while Tom Richards lines up against Saurav Ghosal of India.

“The draw has thrown up some blockbuster matches right from day one, with the world’s best set to go head-to-head in front of a packed house at East Wintergarden,” said Tournament Director Tim Garner.

“The Canary Wharf Classic spectators are amongst the most knowledgable and passionate on the PSA World Tour, and East Wintergarden is transformed into a cauldron of noise whenever these top-class athletes do battle on court.

“With a plethora of current and former World Champions and World No.1s in attendance, I expect this year to be no different and I’m looking forward to watching the drama unfold next month.”

The Canary Wharf Classic will use a best-of-three games scoring format up to and including the quarter-finals for a third year in succession. The semi-finals and final will revert to traditional best-of-five scoring.