2020 FINAL : ElShorbagy is the Champion 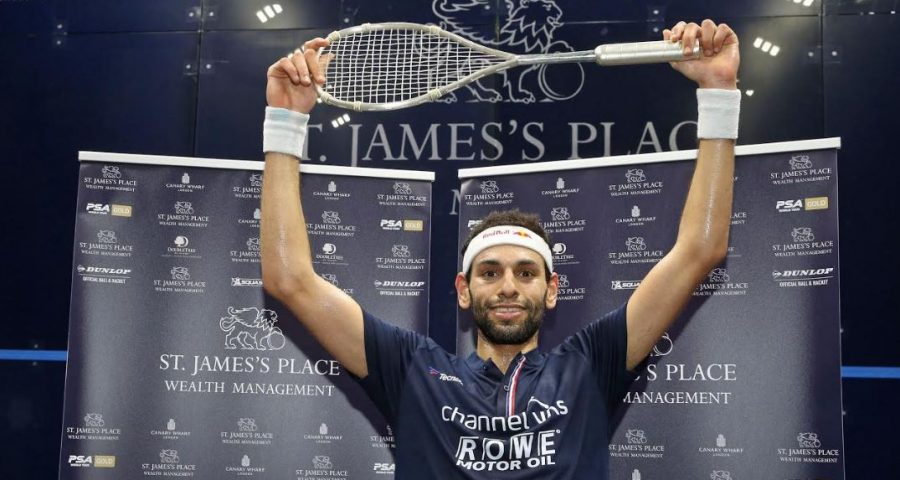 Squash maybe facing a total shutdown, but the best two players in the world gave us an epic final showdown to savour.

Mohamed ElShorbagy played some incredible shots to beat Ali Farag and become the 2020 Canary Wharf Classic champion in what could be the last match of the season after the PSA suspended the World Tour in the wake of the rapidly spreading coronavirus.

The quality of the squash played in the 79-minute final was matched only by the respect both players showed each other.

Some of the rallies were absolutely brutal as brilliant attempts at winners were matched by some phenomenal retrieving.

In a tight first game The Beast of Alexandria hit four volleys into the nick as he thwarted Ali’s amazing movement to take it 11-8.

But in a pulsating contest, former world number one Ali fought back and hit a forehand boast into the nick to claim the second game 12-10.

Mohamed then took the decisive third 11-6, before we were treated to an enthralling final game that went to a tie-break.

Both players exchanged points and had chances to win it before The Beast eventually prevailed 15-13.

Mohamed will be happy to come out on top in what was 20th match between the pair, in a rivalry that stretches back to 2010 when they were both juniors.

The 29-year-old now leads their head to head record 12-8, and has two Canary Wharf titles to his name.

“It would have been a miracle for me to win the fifth. I went for it a few times here and there in the fourth, and it paid off to be honest!” ElShorbagy said after claiming the win.

“The longer you play on Tour, you realise you spend more time with your rival than your family. Ali is not just a rival for me, he is someone who really inspires me and he makes me want to be a better squash player every day.

“I have played so many different players form many different generations, but if I get asked who is the toughest opponent I have played in my life, it will be him. It keeps getting harder every time we play and he keeps bringing something different to the game. I am really glad to see him back and it is such pleasure to be on court with him again.

“This could probably be the last match we play this season, and to have the two best players, it was good to have that. Honestly, what we are facing right now is something that the whole world needs to come together for. I hope that everyone takes care of themselves, not just squash fans, but everyone. I hope this is something that goes away very fast and that we can just come back to normal.

“Thanks to the sponsors of the event. They choose such a wonderful event to sponsor and it makes it an honour to come back here every year. Playing in front of this crowd as well, without you guys, there would be no us. You make it special for us every single year.”

Farag said: “The season is suspended now so we wanted to give you a match to remember before we stop! We did our sport very proud today, Mohamed and I have come to enjoy our battles a lot recently, especially when it is played in front of such an amazing crowd like you guys. We cannot be more grateful really. 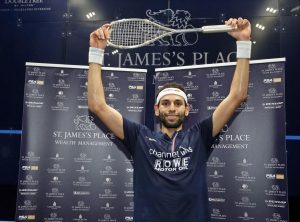 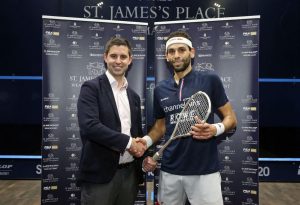 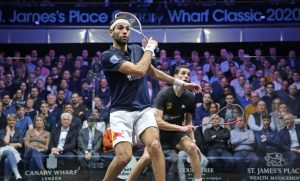 Tom Ford has won a place in the main draw at next year’s Canary Wharf Classic after winning tonight’s Wildcard Challenge.

He sealed the match with a volley into the nick off his opponent’s serve in an accomplished performance against Joe Lee in which he never really looked troubled.

It was an emotional return to court for the 26-year-old, who was forced to take two years off the tour as he battled chronic fatigue.

He had won five titles and was ranked of 60 in the world when his worsening condition meant he had no option but to temporarily give up the game he loves.

Speaking after his 11-6, 11-4 victory, Ford, who lives in Bristol and trains with world number one Mohamed ElShorbagy, said: “Life’s good. This is a proper celebration to be here in a lot of different ways.

“I kind of felt I’d already won just being here.”

Ford will appreciate the struggles of his opponent as, who is also making his first tentative steps back onto the tour after suffering a prolapsed disc in his lower back.

Lee never quite got a foothold in the match to showcase his full array of skills, but both players got a healthy round of applause from the crowd for their efforts at the end of what still proved to be an entertaining match.

As the Tour faces a shutdown, let’s hope it’s a final to remember

Canary Wharf’s army of fans will be relieved to hear that tonight’s final will go ahead following the news that the PSA World Tour faces a suspension until the end of April due to the Covid-19 virus.

With the eyes of the world watching, this match has huge significance.

I am sure that the two finalists, the top two seeds Mohamed ElShorbagy and Ali Farag, will approach this historic event with thorough professionalism and take to the court determined to make it a match to remember.

The quality of this year’s competition has shone brightly in every round. And tonight we reach the final with the mouthwatering prospect of watching the world’s top two players throw everything they can at each other to be crowned the 2020 St. James’s Place Canary Wharf champion.

This week’s tournament has been dominated by a group of brilliant Egyptian players.

The semi-finals were an all-Egyptian affair with two magnificent performances from Mohamed and Ali as they overcame Tarek Momen and Mohamed’s brother, Marwan.

Mohamed recovered strongly after losing the opening game while Ali produced a devastating display to contain the threat posed by Marwan, who has always been a difficult opponent for him.

The rivalry between Mohamed and Ali dates back to junior days.

These two have played 20 times since their first meeting 10 years ago in the quarter-finals of the British Junior Open. Ali won that match and went on to beat Karim Abdel Gawad in the final for his third British Junior title.

By then Mohamed was already established at Millfield School in the west of England, where he still lives, in Bristol.

Mohamed also had a brilliant record in the British Junior Open, winning five titles in all, three at Under-19 level and one each in the Under-17 and Under-15 categories.

In more recent times, their contrasting styles and personalities have created a captivating rivalry.

Eleven of their last 12 matches have been in tournament finals, which shows the phenomenal qualities these two possess.

Tonight’s match is their first meeting of 2020. They played five times in 2019 with Ali winning the US Open, the DPD Open in Eindhoven, and the Tournament of Champions in New York.

Mohamed won the China Open and the British Open, and he leads their Head To Head record 12-8.

Tonight promises to be an epic battle between two players who were close to peak form last night.

As the PSA World Tour suspends operations due to the Covid-19 virus, I am sure both players will want to stage a final to remember.