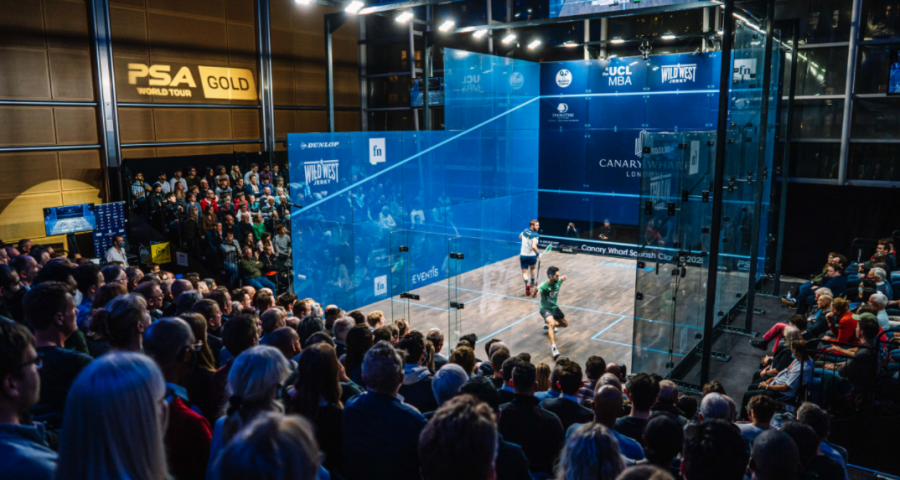 The 18th edition of the Canary Wharf Classic continued this evening with four Round Two matches in the bottom half of the draw,

The number one Frenchman was always in control in the match, especially in the second with the crowd trying to carry their man to the finishing line no joy today though…

“It’s always a pleasure to play James, I have always watched his matches since I was young. It’s always special to be on court with him, he’s done so much for squash, especially in England.

“I’ve been playing well recently and it’s good to get this kind of win. I was a bit worried about the court and conditions yesterday during training as I didn’t feel very comfortable on the court, but today I was really aware of the first few rallies to try and find my length. Then I could be a bit more relaxed in the second and I’m glad I managed to win all the way through and I didn’t give too many cheap points away.

“I was moving well and I was happy with some of the shots, I’m looking forward to playing again tomorrow. I’m going to watch Diego and George and hope they are going to have a big battle. I lost to Diego last time whereas I was up 2/0, so I hope that if I play him I can get my revenge.”

SIMPLE ENOUGH FOR DIEGO AGAINST GEORGE

A bit like for the previous match, a good first game from the English, but Diego very much in control in the second, not giving a chance to his opponent to get into the match…

“I got to London yesterday and had a good practice this morning. I’ve been in Prague training with Gregory [Gaultier].

“It’s always fun to play George. You know what’s going to happen, it can be crazy or normal but it’s always fun. I’m happy with this win and I’m enjoying it.

“I grew up watching James [Willstrop] and Jonathon [Power]. I’ve learned a lot from them and of course, Jonathon has coached me for my whole career. It’s always great having him here, they came to watch last minute.

“Qatar was the biggest win of my career. I enjoyed it a little bit but I knew it was time to work hard again and I’m ready for this tournament. Paul [Coll] is one of my closest friends on Tour and it was great to play in the final and the first final with no Egyptians for years.”

A long first points/game, 17m – score doesn’t tell the story – then simpler for the Kiwi…

“He’s a really solid player, strong around the middle and a very good mover,”

“You have to hit more than one good shot to win the point. I was happy with tonight, felt like I could have started sharper with my short shots but found the back of the court which is key to my game and pushed on from there. I’m happy to be back.

“I never left my routine, had my own routine through lockdown and kept it going. The Tour is very busy again now and we’re travelling all over the world again and it’s just great to have a more normal life. We don’t have a bubble here, so we’re not locked in our hotel room and it makes playing squash more enjoyable.

“Winning the British Open was huge for me and huge for my confidence. There was a lot of support from back home and I had my coach Rob Owen there with me. It was a real special moment for me and it’s such a prestigious event, it’s like no other when we win it.

JOEL DOWN IN THE FIRST TURNS TABLES ON SAURAV

Joel Makin had to work pretty hard to get his seat in the quarters against never say die Saurav Ghosal. Saurav was leading for the biggest part of the 23m first game, but just couldn’t prevent the Welsh come back.
The second game, again very long 21m game, lots of work done and a few decisions, but Joel prevails in 43m.

“Saurav has got that real top end quality, he’s got the skills down the wall, you could see how tight he was hitting it down the backhand and when he has that time on the ball he has those really soft touches. He was really stretching the court out at the start, especially when my quality wasn’t there. You have to get pace into the game because otherwise he is very skilful.

“I was stuck behind him at the start and he played some good stuff around the middle. I had to get a bit of pace back into the ball and get in front of him and take my chances, I was being a bit negative and you’re well aware of the importance of the start in best-of-three. You just have to find a way in those situations to get back on top.

“I’m just enjoying being back playing. We have crowds in now and it’s exciting again. We played for so long without crowds, which was what we had to do but wasn’t what anyone wanted. It’s exciting to be here this week and I’m looking forward to pushing on and going further.

“I did a lot of training with Mohamed [ElShorbagy] going into last season and he’s obviously struggled with a few things and is taking some time off to get himself sharp again. We did a lot of good work together, that wasn’t my best stuff and I feel like I can do better.

“It’s 1-1 with me and Paul this season and they’ve both been best-of-threes. It’s going to be tight, he’s in great form and it’s impressive to break the top Egyptians up. We need variety at the top of the game and hopefully we can all get up there and break it up as it’s more interesting I think.”