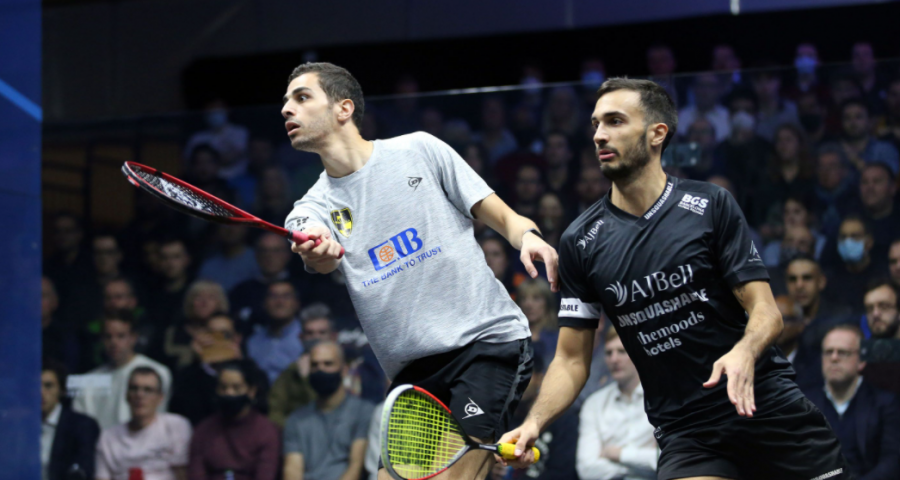 The 18th edition of the Canary Wharf Classic continues this evening with four Round Two matches in the top half of the draw,

You can Watch Live on SquashTV, follow the on Live Scoring and our Twitter Feed, and we’ll have photos, reports and reaction right here with a roundup to follow at the end.

In the longest match of the tournament so far, Colombia’s Miguel Rodriguez squeezed past Declan James in three games, 10-12, 11-5, 11-8.

“I think last time I was here was 2015, there’s something special in this event. The crowd make you play well, it’s the only tournament with a full crowd from day one. Thankful to be back here again.

He’s a very disciplined and talented player, he was very dangerous. I knew it would be tough, I had to dig very deep to get that 2nd game, he played really well in the first, getting every ball back and making it difficult so had to pick top the pace. In the third I was leading, but I had to keep my pace high and won the third. It was a very mental and physical game.

Age is just a number, I adapt my game, squash has changed over the past few years to be very physical and fast so I’m trying to be smart to choose events and prepare differently and im still enjoying the game.

Going to be a difficult match, we played in an exhibition match in New York not long ago and he was fantastic. I wish I could play like that, he’s going to be very challenging. That the good thing about squash, you can play the same players every few months and you have the chance to learn and adapt. But the main thing is just to be back here, in front of this full crowd.

Runner-up last year, top seed Ali Farag would love to add the Canary Wharf title to his impressive connection, and after working his way through a tough opening game against Spain’s Iker Pajares, the World #1 and World Champion eased through the second for a 22 minute 11-7, 11-2 win.

“It’s a joy to talk to you again, and to be here back at CW. This is one of our favourite tournaments, across the year, because of the crowd, the atmosphere is unique in every sense of the word. All of this wouldn’t have happened without the great effort of Tim Garner, he does a thankless job so we all want to thank him for putting up such a great event year after year.

“And for the match, I didn’t play Qatar so had a month in-between my last tournament and this one, you don’t usually get this period without tournaments during the season, so it felt like an off season again, so coming here, the first match of every season you don’t know where you stand you want to test yourself against the big guns

“Yesterday Iker put on a great show, I thought Castagnet was going to get through just because of his experience , but he was the worthy winner and I watched every bit of it, so I was very wary of that was going to happen today, I started the match with very open squash and he punished me right away. Okay I need to go back to basics again, so that’s why the first part of the game took so long cause I wanted to assert myself on the T before I open up, then I opened up a little too much but found my game in the second.

“I couldn’t have asked for a better year really, lockdown, as tough as it was with people losing their jobs and dear ones, this is obviously something nobody can be happy about. But for me the lockdown was a happy period, it gave me some time to be at home and spend time with family, which is something that I never usually get chance to do during the season. To reflect on where I want to be in my career and life, but it was a good period off and now getting back in was tough without a cold but now we’re back and I’ve had a great year having my first child and winning the world championships all within 11 days, couldn’t have asked for a better year.

“Well I never thought I would be professional, I always thought juniors would be the end of it for me. I prolonged it for a bit at university, my elder brother Wael and Nour and my college coach Mike Way, the three of them kept pushing me to play, they said you have the talent for it, the hunger for it and to just go for it, I had to serve in the army so couldn’t get a job anyway for one year, so thought I would just go for it was touring the world with the person I love the most, doing the thing I love the most, and I was doing well so I thought okay this is the thing I will do for my career for the next few years and thankfully it went a lot better than I expected.

Momen took the first comfortably, but Masotti started the second well and stayed in front despite a late charge from the Egyptian. But it was all Momen in the third as he raced through for a 11-4, 9-11, 11-1  victory.

“I’d played him once in training in Egypt a few months ago, I knew he’s a danger as an upcoming French player and I tried to be very sharp from the beginning today.

“Coming into this event, I didn’t think I had the best preparation, but I felt like I was getting into it, I wanted to get into the rhythm, the past two days I’ve been spending a lot of time on court and today I tried to start well, get myself in the zone. I think I did that well in the first game, but Baptiste is a fighter and he never gives up.

“He came back in the second and stepped it up a level or two from then on I lost track of my game plan a little and I opened the court up much more than I should and he took his chances and built up a lead throughout the second game. I think I did pretty well to come back and thanks Roy, the decision at the end cost me the game.

“In the third game I found my rhythm again and he was a bit unlucky with some errors and I just managed to get away with it.

“The court rewards a good shot, it rewards good drops and kills, it’s always good to have that. I felt happy on court today, moving well hitting good lines, have tomorrow to practice on it as well, hopefully after tomorrow I’ll be ready.

“Mostafa is doing very well for a 20-year-old. You don’t see many players breaking through to later stages of Platinum events. He is a great player, I wish he didn’t resort to the stuff that causes issues every time, if I play him 100 times I always think about the game plan and what I’m going to do, I try so hard to block out everything else, I take it one match at a time and see how it goes, after tomorrow it’s a new day and all I care about is playing my best, hopefully no shenanigans, hopefully it’ll be a good match.”

"It’s my first time to be here in Canary Wharf and it’s amazing for me. The crowd, they are playing with us, I love the crowd, I’m a man of the crowd. I love you guys being here.

“The other players told me you should come, it’s been amazing to see, even on SquashTV and how the fans are so close to the players. Last time my ranking didn’t get me in, but I’m very pleased to play in front of everyone here because you guys make the sport grow and grow, no seats left in the venue. Hopefully the sport can get to the Olympics, I’m going to make the sport grow for you.

“The U.S. Open was an unbelievable tournament for me, I played for 150 mins to win the tournament. It was very tough, was losing in all my matches, was 2-1 down, I had some injury in my shoulder and didn’t know if I was going to play this event or not, but the doctor said I could play.

After Super Sunday (or was it Selby Sunday?), we look forward to Magic Monday as the top seeds join the fray.

Ali Farag, Tarek Momen and Miguel Rodriguez are established favourites with the knowledgeable East Wintergarden audience, but tonight’s programme kicks off with their first view of Mostafa Asal, who has been blazing a red-hot trail through the top end of the rankings during the past year or so.

It goes without saying that he will need to bring all those successful elements of his game to the court tonight against one of the most dynamic and exciting players in the game today.

He can bank on the Bank Street crowd getting behind him all the way. However, Asal’s triumphs (and outrageous celebrations) have created such a stir in the sport that he has created a huge global following and it will be interesting to see how the crowd reacts once the match gets under way. Especially if there are any clashes around the mid-court area. Waller, of course, is 6ft 4in tall and … well, he can obviously take care of himself.

The second match gives Baptiste Masotti the chance to pit his skills and ambitions against former world champion Momen.

The Frenchman won over the crowd with his after-match comments yesterday when he told them that playing before a packed East Wintergarden had always been a major career target. His generous tributes to his first round opponent, wild card Charlie Lee, were also well received. He will certainly need the crowd’s support tonight as he aims to spring a major shock against the one of Egypt’s best-ever players. Momen was runner-up to New Zealand’s Paul Coll in the 2019 Canary Wharf final and is determined to see his name etched on the winners’ list.

Top seed Farag shares the same desire and one look at his interview published here a few days ago shows how acutely aware he is of the handful of errors that cost him dearly in last year’s epic final against Mohamed ElShorbagy.

Farag, the world champion and world number one, comes up against Spain’s hugely talented Iker Pajares, who played superbly to beat our 2016 champion Mathieu Castagnet yesterday to spoil the Frenchman’s 35th birthday celebrations.

The Colombian Cannonball is still as mobile as ever at 35 but the positive way that James changed his game around against Kandra will give him plenty of confidence ahead of tonight’s battle.

Expect to see some contrasting styles from these two athletes, with James 6ft 4in tall and Rodriguez 5ft 7in.

After a brilliant start to the tournament yesterday, we are looking forward to another entertaining evening in front of a passionate London crowd. 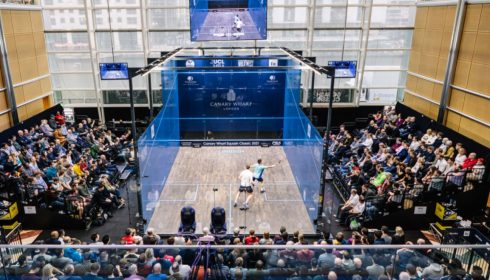 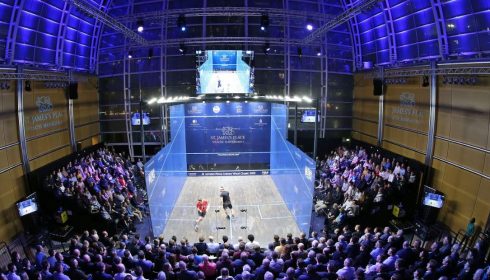