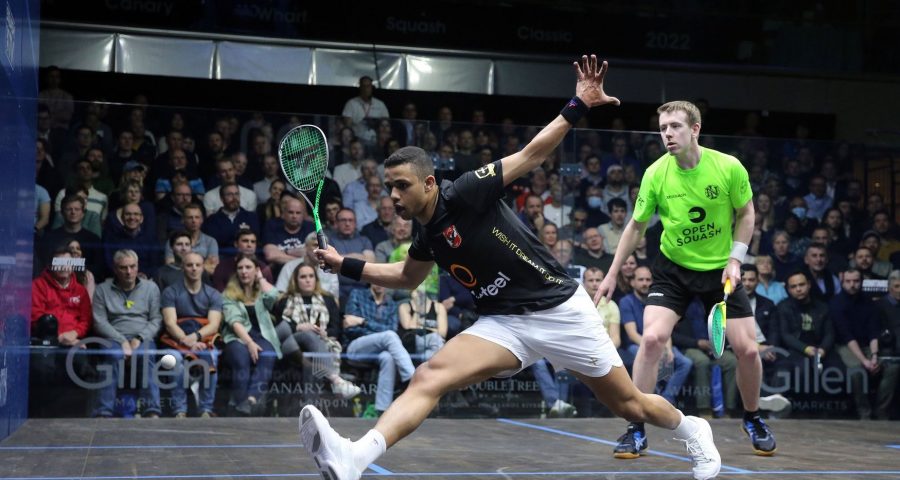 Mostafa Asal was involved in a bruising battle as he returned to the PSA World Tour following suspension in the GillenMarkets Canary Wharf Classic.

Asal received a conduct warning from referee Jason Foster for over-physical play during his second round clash with England’s Nathan Lake.

The 20-year-old world No.4 won 11-9, 11-9 in 42 minutes of aggressive squash punctuated by some dazzling winning shots in between a succession of collisions around the mid-court area.

Lake, the Chicago-based left-hander, started strongly and picked off some early winners to continue the outstanding level he produced to beat France’s world No.11 Gregoire Marche in Sunday’s first round.

Asal began nervously but soon worked his way into a rhythm, but Lake was up for the challenge, matching his opponent for quality and refusing to budge an inch when the physical stuff threatened to get out of hand.

After one collision Asal left the court for treatment to his shoulder but he returned to book his place in the quarter-finals.

The packed crowd made lots of noise to encourage Lake but Asal turned on a charm offensive after the match.

“I want to say, I’ve missed you guys,” was his opening remark to the audience.

“I’m impressed with the way Nathan played – he was unbelievable. First of all, I’m really happy to be back. Not competing for two months is ridiculous for me. I’m so so happy, I’m happy I’m back here playing my squash, playing competitive matches, especially Canary Wharf. This crowd is amazing, there are no seats left in here so I’m really proud that I’m back.”

Asal generously praised his opponent, adding: “Nathan played superbly. He was tough and played a great game, a good basic game then attacking. It seems like he’s a bit heavy but he’s not. He picks up every ball, which makes me think I want to go early to the front and then back, so you question yourself, so I’m happy to be through. You saw yesterday how Victor (Crouin) beat Paul Coll, so I was wary about Nathan winning today.

“I was getting back to the hotel when the match was on and until 10-7 match ball we didn’t really believe Victor could win. No disrespect to Victor, but all credit to him. It shows how the tournament is entertaining with best of three scoring, and anyone can beat anyone and just like that you can lose. I need to be focused. I’ve come to win the tournament this time, I’m not here just to have some fun.”

In the quarter-finals he meets No.6 seed Joel Makin, who was also forced to work hard to beat a lower-ranked player, finally shaking off Baptiste Masotti of France 11-7, 12-10 in 36 minutes.

The entire match was played at a blistering pace and at no time during a marathon rally at 10-10 in the second game did either player elect to slow things down.

Makin said: “Baptiste was incredibly attacking in that match. I managed to keep the ball away from shoulder height but he had a patch in the second where everything was a straight kill or a cross-court nick, but I had to get it high and switch it to close it down but I managed to find the quality in the end.

“You still want to switch with height and use the subtleties, and that’s what so good about the game: you’ve got the aggression into the front and the switches with pace and skills. That’s what squash is at the top level: it’s exciting. It was a good match and I enjoyed it.”

Looking forward to his quarter-final tussle with Asal, he added: “It’ll be an interesting match tomorrow, I’m looking forward to it. He’s causing a few issues and getting stuck in, and I do enjoy that so it’ll be good.”

Switzerland’s Nicolas Mueller reduced the number of Egyptians in the quarter-finals by repeating his Wimbledon win against Marwan ElShorbagy.

The 32-year-old Mueller is playing with a high level of confidence, working the ball around the court with pace and precision and attacking at every opportunity.

Mueller won 11-7, 6-11, 11-6 in just 30 minutes to continue the theme of lower-ranked players fearlessly taking the game to the top seeds.

ElShorbagy turned the tables to dominate the second game but could not maintain that level of control in the third as Mueller regrouped and returned to the same high level that won him the first.

After the match Mueller admitted: “I’m still trying to get my breath back – it was quite an intense game. In the best of three format the first game is so crucial. When you get that 1-0 lead under your belt, it helps. Considering I played very well last week, I’m very happy I could keep that going into this week.

“If you’re lower ranked you have nothing to lose and all the pressure is on the top seed, and as we saw last night with Paul, the World No.1 losing, it can happen.

“I was eating quite a lot to recover, so hopefully the tournament doesn’t go on for too long as I might be carrying a few more kilos. For us players, it’s amazing to play in front of a full and knowledgeable crowd and it’s nice to hear some noise after all that covid break over the last 18 months. I just love playing in front of you guys and hopefully, I’ll be here for a bit longer.”

Mueller meets No.4 seed Diego Elias in the quarter-finals after the Peruvian ended the run of the 2016 champion Mathieu Castagnet.

The Frenchman played brilliant squash and dug deep into his physical reserves to beat Eain Yow Ng on Sunday but Elias constantly constructed rallies to exert maximum pressure on his opponent.

Amazingly, Castagnet chose to up the pace at various times during the match but the Peruvian edged the first game and his tactical investment paid off as Castagnet tired in the second.

Elias was full of respect for his opponent and said: “He’s always been a warrior. I grew up watching him play, and he was one of the fittest on tour. He played a brutal match the other day and I guess he’s not as young as before.

“I tried to make it long at the start, and I think it worked. I think playing three games in almost 70 minutes the other day was tough for him and I’m just very happy to be done with this. It’s best of three so I was a bit nervous.”

As for meeting Mueller, he added: “He played great last week. I knew it would be tough between him and Marwan and I guess I just have to be at my best tomorrow to beat him. But it’s best of three and he has great hands and he’s playing his best squash I think.

“You have to be at your best from the start. You see so many upsets in best of three so I need to get a really good warm-up and be ready for tomorrow.”

Last night’s top half of the second round schedule delivered a feast of entertainment highlighted by the astonishing drama of French newcomer Victor Crouin beating our reigning champion and new world No.1 Paul Coll.

Tonight’s bottom half programme promises to provide four more mouthwatering matches, each with an underlying subtext hinting at another night to remember.

First up on the glass court at 6pm we see No.5 seed Marwan ElShorbagy being given the opportunity to gain revenge against Swiss No.1 Nicolas Mueller.

Nic beat Marwan last week on his way to the semi-finals of the Optasia Championship at Wimbledon, where his run ended against the eventual champion, Ali Farag.

Now 32, Nic is clearly looking relaxed and enjoying his squash. World No.7 Marwan, 28, has reached the semi-finals here twice and that defeat at Wimbledon followed a win over Farag in the Windy City Open.

The second match features Peru’s No.4 seed Diego Elias against our 2016 champion Mathieu Castagnet, who produced a stunning first round win against Malaysia’s Eain Yow Ng after receiving a late call-up to play.

Now 35, Castagnet is maturing like a top-quality French wine, with full-bodied commitment and exquisite notes of subtlety and style.

Elias recovered from a second round exit in Chicago, where he lost 13-11 in the fifth to Spain’s Iker Pajares, by reaching the final in Wimbledon last week.

After the break the crowd will all want to be back in their seats nice and early to watch Egyptian superstar Mostafa Asal, our No.2 seed, make his return to the East Wintergarden against Sunday’s giant-killer Nathan Lake, who took out France’s world No.11 Gregoire Marche in straight games.

Last year Asal went down with a vicious bout of food poisoning after a late night chicken dinner following his second round win over Adrian Waller.

He did well to front up for his quarter-final tie against Tarek Momen but had nothing in the tank.

This year he is relishing his return to action following a PSA suspension for unspecified misdemeanours.

Yesterday he and Marwan were happily hitting on court with a group of Essex school pupils and Mostafa has vowed not to repeat his culinary choices involving a well-known restaurant chain.

His recent social media posts have underlined the fun and mischief he brings to the sport.

On March 1st, when Paul Coll became the new world No.1, Mostafa cheekily posted two images on Facebook of him in action against the New Zealander at the Black Ball Open. No words accompanied the post, but both pictures contradicted Coll’s insistence that he is trying to cut down his diving around the court.

Last week, Asal announced that he was looking forward to returning to London with a Facebook post telling his fans: “The King is back. See you in London on Tuesday.”

Asal was clearly looking forward to the opportunity of meeting Coll in this week’s final but that is no longer on the agenda following the Kiwi’s shock exit last night.

The home crowd will clearly be giving Lake plenty of support, but if anyone knows how to fire up a squash audience it’s Mostafa Asal.

I hear he has been working with a PSA-appointed advisor to amend his footwork patterns to remove the “trailing leg” syndrome that has caused so much controversy in much of his career.

We look forward to seeing the results of that experiment on court this evening.

Makin began the reshaped post-Covid season by reaching the semi-finals in the US Open and Qatar Classic in October.

In Philadelphia he beat Ali Farag in straight games before losing a tough five-setter against Tarek Momen.

He lost in four hard games to Diego Elias in the Qatar semis and then lost twice to Paul in the quarter-finals here at Canary Wharf and again in the Black Ball Open.

Makin began the New Year with an excellent run to the final of the Squash On Fire Open in Washington, where he found his regular training partner Mohamed ElShorbagy too hot to handle.

Joel beat Karim Abdel Gawad in the Windy City Open before bowing out to Coll in another quarter-final, and lost at the same stage in Wimbledon last week as Farag gained revenge for that Philadelphia result.

Masotti will clearly have been fired up by his own experiences on Sunday, and every French player will have been inspired by Victor Crouin’s superb performance last week.

All the ingredients are there for another fantastic evening of squash for the Canary Wharf crowd.