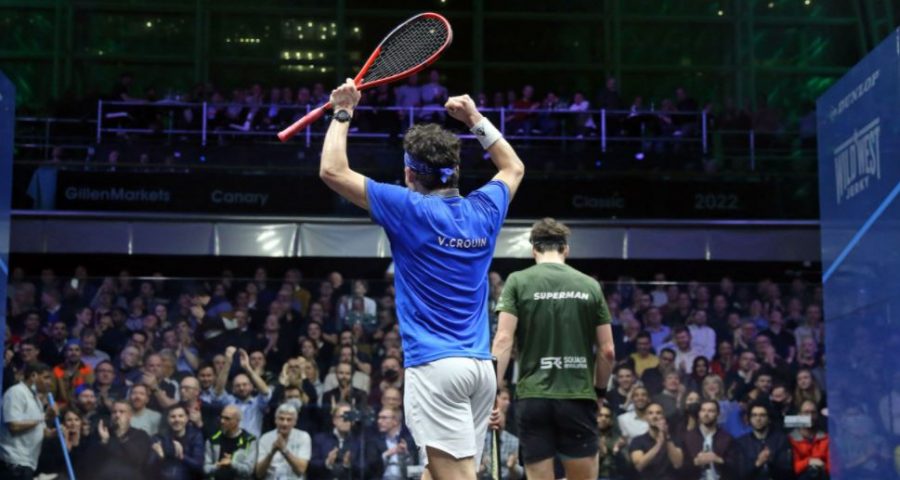 Victor Crouin produced one of the most extraordinary results in the 19-year history of the tournament when he overcame world No.1 Paul Coll 11-7, 11-7 in the second round of the GillenMarkets Canary Wharf Classic.

Crouin made a nervous start in his first appearance in the tournament yesterday but tonight he looked full of confidence as he executed an ambitious game plan with flair and precision to beat the top seed.

New Zealander Coll looked slightly below his usual high standards and failed to find a solution to the young Frenchman’s variety of attacking options.

A packed East Wintergarden audience cheered Crouin to the rafters as he picked off any loose balls from Coll with superb accuracy.

Coll’s usually immaculate control disappeared towards the end of the second game with a couple of shots flying down the middle of the court.

A delighted Crouin told the crowd: “My game plan was just to win one game. We played four times last season and I didn’t get one game, but as I said yesterday, if I can get one game then I could have the belief to win the match.

“After yesterday, it was the first time I’d played best of three and I didn’t like it, as it takes away the endurance of the game, but today I just beat Paul Coll in two games so I think I like it now.

“If you just play to the back of the court with Paul, you’re usually going to lose. I think my strength is trying to move my opponents into the four corners and today I needed to be more aggressive. I just wanted to stay relaxed and have fun and play my shots without thinking too far ahead. I hit some great shots and it worked out.”

This result is of huge significance for French squash and Crouin added: “We have some great legends of the game in France, Greg Gaultier and also Thierry Lincou, and national coach Renan Lavigne (watching in the front row) was amongst them as well.

“I used to watch them and I dreamt of being here and yesterday I was overwhelmed by you guys and I felt a bit anxious. But after I’d played on the court I felt better, knowing what it was like, so I just wanted to play to the best of my ability tonight.

“I just tried to play my squash; I didn’t have much expectation. Paul’s No.1 because of his consistency so I’m glad I could break that today, but he’s World No.1 and I’m sure he’ll stay there for a while. Everyone is chasing him, but personally I was just trying to improve my game and be more consistent competing against these players and get some results this season so I can be among them to get to top 15, top 10 and someday world No.1.”

In the second match of the evening, England’s Adrian Waller also threatened to produce a shock result as he won the opening game against No.3 seed Tarek Momen.

Waller bravely attacked Momen at the front of the court and was rewarded with a 14-12 win.

Momen admitted later that he was struggling to find a good length but worked his way back into the match to win the second and third games 11-8, 11-6.

Momen said: “Adrian played really well today. He was really sharp apart from a few errors here and there but he was really sharp and taking the ball early. I, on the other hand, couldn’t get the ball to the back of the court for some reason. It’s no excuse for a professional player to not be able to adapt for three games but I think I got better in the end.

I found some length and had some good winners and made some errors as well. He helped me a little bit with some errors at crucial times but overall I think he played well, and I kept improving which is a good thing.

“It’s always tough to play best of three. Playing a tricky player like Adrian, there’s a lot of pressure on me being the higher seed but I’m happy that I handled my nerves and eventually got to sneak the win in the end.

“I don’t forgive you guys for the double bounce, thanks for reminding me, maybe because I was on court, but I thought it was two and a half bounces, but I’ll watch it back and see. It wouldn’t affect the outcome of the game because he won 14 points (in the first game) and one point is on me so it’s OK.”

Our conversation turned to Tarek’s time management skills as he juggles tournament play, training, travelling and sharing childcare responsibilities at home. He said: “I can’t take credit for everything. Raneem has been amazing, she helps me so much, she really carries the burden of Shahir [Momen’s son], and the most difficult thing is going away when they’re not with me because I just want to cuddle with the little one.

“I took them to Chicago with me which was really fun. Back home when I’m training I try to spend a lot of time at home with them. I basically just go to training and then home, I don’t mess around any more, I just go home because I want to be with them so much.”

When asked if Raneem might follow Nour El Tayeb’s return to court, Tarek skilfully evaded the question but added: “I just texted her [Nour El Tayeb] after the match to tell her that it’s incredible what she’s been able to achieve, to be able to return to this form in only five months after giving birth, I have no idea how she managed to do that. Even if she had lost to Hania today it’s still an amazing achievement.”

Dessouky soaked up everything that Rodriguez could throw at him to triumph 11-7, 11-9 in 30 minutes of marvellous squash.

Dessouky said: “Today was a very good match. It was very testing. Miguel played very well – he’s very entertaining, I always enjoy playing him. He’s a good friend of mine and it’s always nice to play a very clean match.”

Asked about one of the incredible trick shots that came from his racket, Dessouky admitted: “I didn’t mean it – it was 100% luck. I had to play it and just make sure it touched the wall. I think it’s going to be a shot of the month. I’m glad Daryl Selby isn’t in this tournament, he’s always winning it.”

Questioned about his health and fitness, he said: “I’m feeling very well. I started moving really well and smooth so I’m happy. I’m still gaining confidence throughout the matches so this is the best thing.

“I’m very happy to be here, I always enjoy this tournament. I’ve been in the final before and I’m hoping to be there again.”

Mazen Hesham brought the curtain down on an unforgettable evening of squash with a highly entertaining victory over Patrick Rooney, winning 11-9, 11-9.

England No.1 Rooney fought hard and almost drew level after a determined second game fightback, but Hesham clinched victory with a crushing crosscourt volley nick off the serve to end proceedings.

Afterwards Hesham said: “Today was really difficult. I’ve never felt that drained mentally just to come and play. I wasn’t going to come and play today, I felt a massive setback after my match against Diego (Elias) in Wimbledon. I’m glad how I came back today, even with all the nerves I can win. It’s my first win on this court, actually.

‘It’s an amazing crowd. After last week I’m still not happy with my game. I’m trying to fight it in my head, and trying to do what I was supposed to do years ago before my injuries.

“My shins have been killing me for four or five months, and I’m trying to find a solution for it. I just have to play every match with a physio beside me and some days are worse than others but I know it’s not going to come easy.

“With all the injuries I’ve had, I don’t want to say it’s unlucky because you make your own luck, but I kind of enjoy how tough it is for me and trying to embrace it as much as I can.

“With best of three, you can see it’s very intense. It’s better for some players than others. Even the last few shots here I was shaky, I wouldn’t go for winners, you play with a bit more nerves because you don’t have the time to build up the rallies.

“We saw it today with Paul, but Victor is playing amazingly well. He’s up and coming, the same as Patrick, and it’s only a matter of time before they’re challenging us.”

Tonight’s winners will enjoy a rest day before Wednesday quarter-finals, when Crouin takes on Hesham and Momen meets Dessouky.

Four fascinating matches are on the East Wintergarden menu this evening as the top seeds join the fray for the second round of the GillenMarkets Canary Wharf Classic.

First up at 6pm is a battle between No.7 seed Fares Dessouky and Miguel Rodriguez. Of tonight’s four battles, these two are the closest in world rankings, with Dessouky at 10 and Rodriguez at 12.

While Dessouky had a practice yesterday, Rodriguez got into the Canary Wharf groove with a first round tie against four-times champion James Willstrop. These two rolled back the years by putting on a hugely entertaining display with Rodriguez squeezing home by a narrow margin in each game to win 11-9, 12-10.

And yes, of course he dived around the court in flamboyant style!

He may need to put those retrieving skills in overdrive tonight against Dessouky, who was runner-up to Nick Matthew here in 2017.

Next up, England’s Adrian Waller tackles No.3 seed Tarek Momen. Momen has been runner-up twice and would love to add his name to the star-studded winners’ list.

According to the stats this is Tarek’s 500th PSA tournament match so he will want to crown the occasion with a dominant performance.

Waller worked hard to get past compatriot George Parker yesterday in another close encounter with a 12-10, 11-9 scoreline. The 6ft 4in Londoner is sure to get the backing of a packed home crowd.

After the break, it will be my honour to welcome our reigning champion Paul Coll back to the East Wintergarden as the new world number one.

He faces France’s Victor Crouin, who has yet to take a game off him in four meetings.

However, Crouin can take heart from the fact that Egypt’s Youssef Ibrahim, the Princeton student he beat in the recent US Colleges Individual final, took two games off Coll in the Windy City Open final.

That was the week when Coll celebrated his elevation to the top of the world rankings, and, in true champion style, he fought back from two games down to add another Platinum title to his collection.

The final match of the evening is an England-Egypt battle between Patrick Rooney and Mazen Hesham.

After beating Mohamed El Sherbini yesterday, Rooney admitted to having a fan crush on his opponent tonight.

He said: “Mazen is decent, isn’t he? I’ve never played him before and I like watching him. I’ll try and take the ball in before he does, to get in his head.”

England No.1 Rooney is at a career-high ranking of 25. Hesham, meanwhile, has also climbed to a best-ever slot of nine in the world.

Expect plenty of fun and fireworks. Not just in this game, but throughout the whole evening.