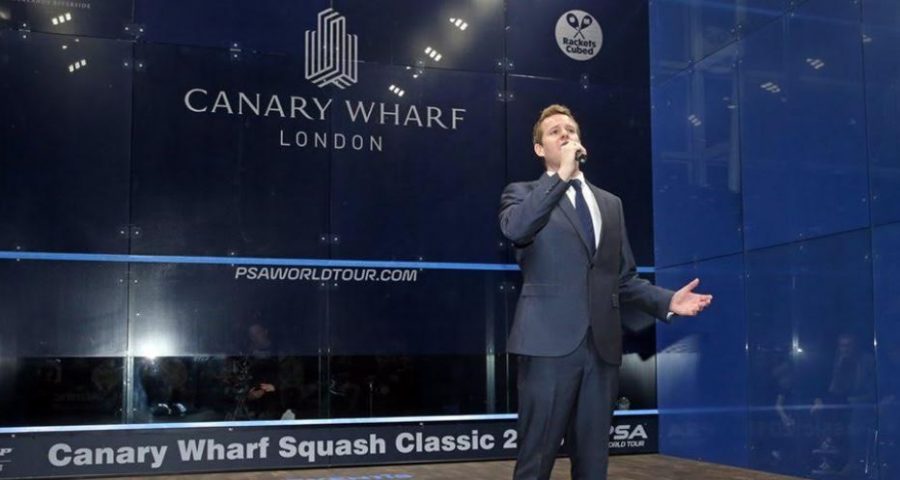 Alexander Wall, a squash-loving opera singer, will again be serenading a sell-out crowd packed around the glass court before the final of the St. James’s Place Canary Wharf Classic on Friday, March 13th.

This is the third year that the popular tenor’s powerful, beautiful voice will set the tone for an evening of pure sporting drama at the superb East Wintergarden venue as two of squash’s global stars battle for one of the biggest prizes in the game at London’s favourite tournament.

On Friday evening, instead of delivering a pulsating Pavarotti piece, or a classic like Jerusalem, Alexander will be staging the premiere of his very own composition.

Called Heroes, this rousing anthem is a tribute to the superstars who follow his musical overtures to so many special sporting occasions.

Alexander, who plays squash in west London at the Charing Cross club, is delighted to be able to launch his arrangement at Canary Wharf, a few days after competing in Monday’s media competition on the same glass court.

Last year he reached the semi-finals but had to leave for a rehearsal at the Royal Opera House!

Whatever the result of his efforts with a racket, Alexander hopes the enthusiastic Canary Wharf crowd will have a ball and enjoy his composition on Friday evening.

He said: “I have always wanted to write my own song, one that would touch people and inspire them. One that would send out a positive message. One that I would enjoy singing and that could also be sung and played by others.

“Apart from my opera career, where for over 10 years I have trod the boards at The Royal Opera House as a chorister (currently performing ‘Fidelio’), I have been honoured to sing for numerous sporting legends at sports events.

“Generally I perform opera pops like the infamous ’Nessun Dorma’ which is almost a tribute to the late, great Luciano Pavarotti! He was the first opera singer to set hearts alight in a sporting arena when he performed at the Italia 1990 Football World Cup.

“Since then, singing at sports events has become a ’thing’. It was after performing for the final day of The Champions Tennis at The Royal Albert Hall that an idea started to form in my mind: I could potentially write my own sports anthem!

“So I sat down at home and penned some words. My focus would be on the sports stars themselves. I wanted this to be an anthem for them. I wanted the song to reflect this; the singer and the crowd are on their side, willing them on and hoping for a thrilling outcome.

“In our modern society these men and women have so often become lauded and set apart, taking us out of our mundane reality and inspiring us with their sporting prowess – they are our heroes.

“So the tone of my prose was set, the title right there – ‘Heroes’. The words then came very easily and quickly.

“Musically, I had in mind a hymn, with a similar feeling to that of Hubert Parry’s ‘Jerusalem’, but that had a memorable chorus that would easily be picked up by a sports crowd.

“The ultimate goal would be for them to sing it of their own accord, chanting it in the arenas and terraces.

“I hope I have achieved this.

“Only time will tell…” 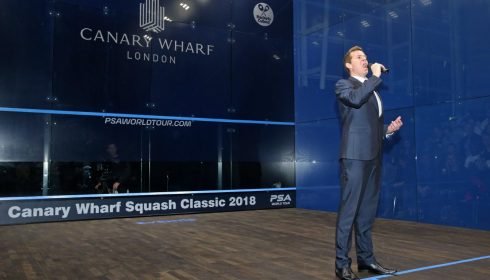