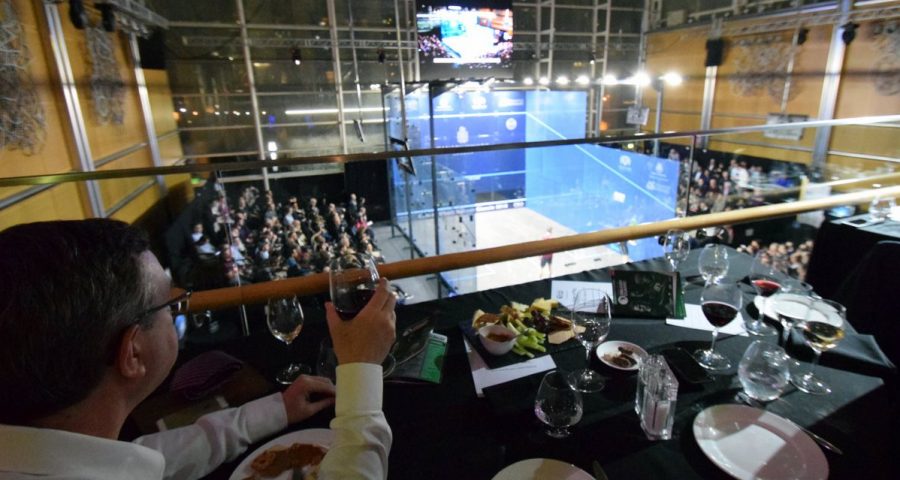 Don’t be late for Sunday lunch –
the starter looks tasty!

What a tasty starter to serve up at Sunday lunchtime! Former world number one Willstrop will go for the vegan menu.

He is still playing outstanding squash at the age of 35 and faces a tough test against the skillful and flamboyant Egyptian, who is working his way back into the upper echelons after an injury last year.

Two left-handers in action here as world No.16 Kandra takes on Londoner Waller. Kandra upset the script at last year’s British Open when he knocked out Nick Matthew in his farewell tournament. Kandra also beat Marwan ElShorbagy to reach the semi-finals. Not bad for a qualifier!

Waller achieved a career-best win in last week’s World Championships when he beat No.10 seed Diego Elias of Peru in the first round before going out to Mazen Hesham in Chicago. Waller will be looking for a repeat performance after beating Kandra in the recent Motor City Open in Detroit, winning 11-7 in the fifth.

Waller recently reached the semi-finals of the British Nationals beating the higher-ranked Tom Richards, a fellow Londoner, in the quarters.

Two very experienced campaigners in action here, battling for a place in the second round against top seed Mohamed ElShorbagy. Pilley is the oldest player in the draw and has amassed a collection of medals at the Commonwealth Games. He is also the hardest hitter of a squash ball in history, clocking up a phenomenal top speed of 178mph.

Last week he lost in five to Simon Rosner in the World Championships in a five-setter lasting 93 minutes. Rosner called Golan’s display a “tactical master-class”.

Something of a giants’ parade in the first four matches, with Willstrop, Waller and James all 6ft 4in tall. Dec is enjoying the best season of his career, starting it in style by beating James Willstrop to win the Nantes Open final on stage in a beautiful theatre in the French town.

He has reached a career high of 16 in the rankings after a spell of outstanding form, including a marathon match against Adie Waller in the US Open (winning 16-14 in the fifth after 101 minutes).

Both players had tough draws in the World Championships last week. James succumbed in a five-setter to No.9 seed Mohamed Abouelghar of Egypt and Lobban lost narrowly to Gregoire Marche after 84 minutes, the Frenchman pinching the first game 19-17.

Lobban has moved to Sheffield to advance his career, working with Nick Matthew at Hallamshire. He reached the semi-finals of the Nationals losing to James Willstrop (who he met in the first round here last year). Lobban also reached the final of the Scottish Nationals last week, losing a tight final to Alan Clyne.

Daryl Selby always enjoys huge support at Canary Wharf, with a large Essex fan club cheering on “Bobby Dazzler”. At 36 he is the second oldest player in the draw (two months older than Borja Golan and one week younger than his Comments From The Couch Podcast partner Cam Pilley).

How well is Daryl playing at such a ripe old age? Consider this, when he lost to the new world number one Ali Farag in the Tournament of Champions in New York, the scores were 15-13, 12-10, 13-11. He then finished runner-up to James Willstrop in the Nationals. Before Christmas he beat Omar Mosaad in the final of the Qatar No.1 tournament.

Parker is happy to mix it with the big boys and recently featured in an astonishing marathon match in the first round of the Tournament of Champions in New York, losing 12-10 in the fifth to Mathieu Castagnet after 137 minutes.

Parker beat Cam Pilley and Ivan Yuen in Qatar before losing in the semi-finals to Mosaad. He also beat Mazen Hesham in five in the first round of the US Open. George loves a friendly chat with referees.

The Pontefract Massive should be nicely warmed up by now, having arrived early to cheer on James Willstrop in the opening match. The crowd are sure to get behind 15-year-old wild card Sam Todd, who has an enjoyed an outstanding season by winning the British Nationals Under-17 final and then lifting the British Under-23 title at Roehampton.

He faces a massive task against the 2016 Canary Wharf champion Mathieu Castagnet. After beating Omar Mosaad to win the final here at the East Wintergarden, Castagnet took some time out for treatment to an injury and he is back playing excellent squash. He will be keen to recreate some wonderful memories here at Canary Wharf.

England v Scotland is always a battle. Richards is enjoying a spell of superb form and showing what a class act he is on court. He reached the quarter-finals in Toronto last week, where he went out to Paul Coll, and a win over Alan Clyne will pit him against the New Zealander once more.

Clyne will also be aiming to put in a huge performance on Sunday. He recently won a record ninth Scottish National title in Edinburgh at the age of 32, beating Greg Lobban in a closely-fought final. It may have been 3-0, but the scoreline of 11-8, 15-13, 12-10 shows why it lasted 77 minutes.

It’s good to see Joel Makin back in action after a dreadful injury in the Tournament of Champions. He was two games up against former world champion Karim Abdel Gawad when he rolled his ankle. He returned to action in the World Championships in Chicago and won two tough five-setters before losing to Saurav Ghosal in the third round.

Greg Marche is one of the smaller guys on the Tour at 5ft 7in but is fast around the court and rivals Miguel Rodriguez and Paul Coll in the diving stakes. He recently lifted the French National title the week after winning the Pittsburgh Open, beating Zahed Salem of Egypt in an 83-minute five-setter. Should be a cracking match to finish a Super Sunday of Squash.

Four of the game’s “golden oldies” will be in action in Sunday’s first round.

Will it be their last appearance at the East Wintergarden? Who knows?

We salute all of them for the fantastic enjoyment they have given audiences all over the world during their careers and we hope they carry on playing for as long as their bodies will allow.

Look at tennis. Roger Federer fancies one last crack at an Olympic gold medal in Tokyo next year, when he will be 39.

However, let’s not mention the Olympics again … or break-dancing. 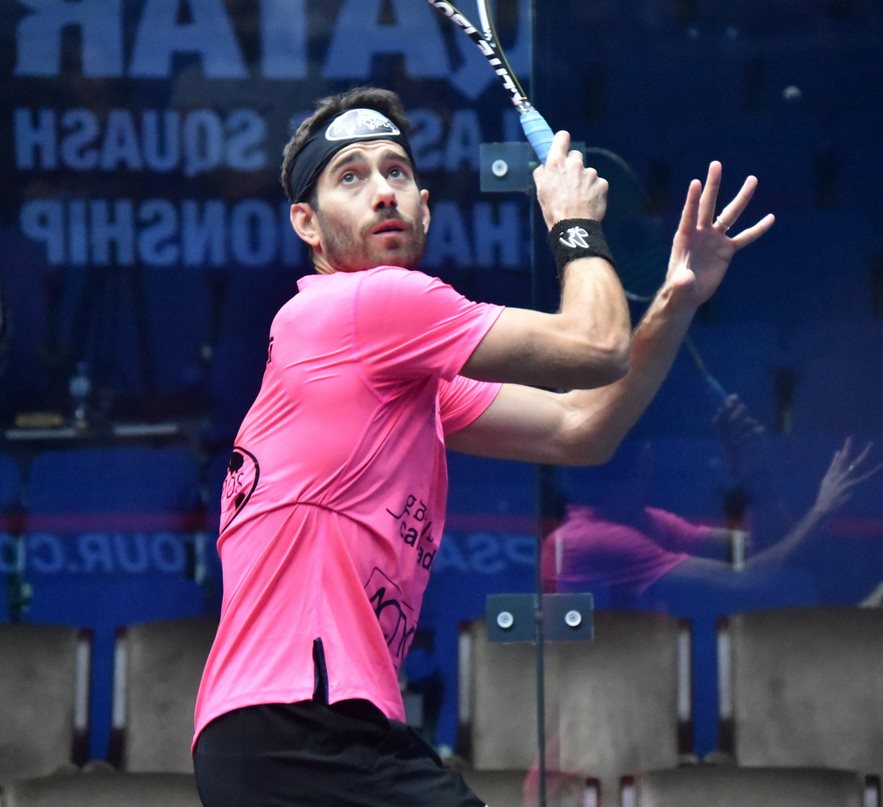 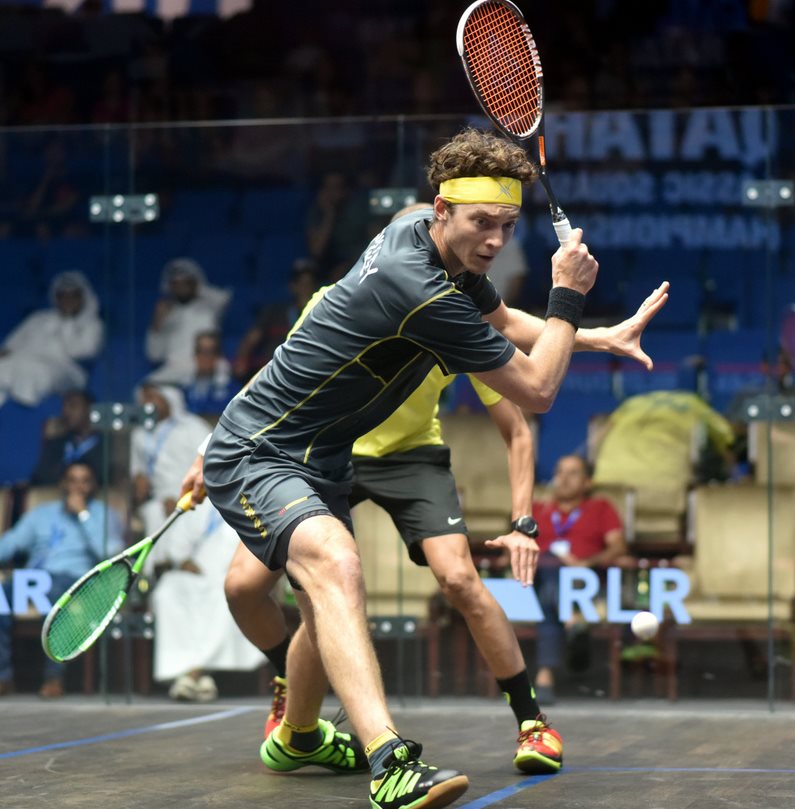 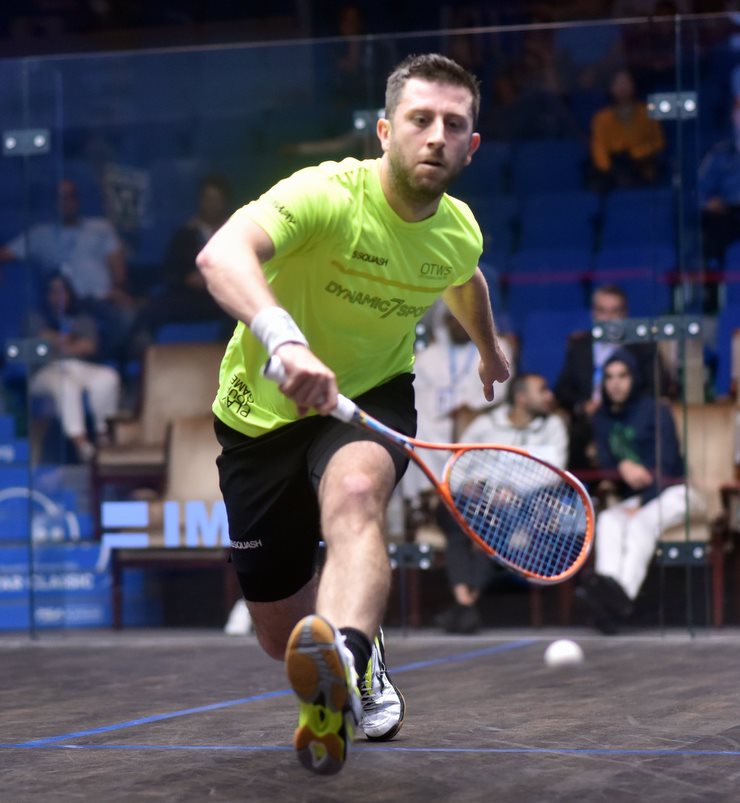 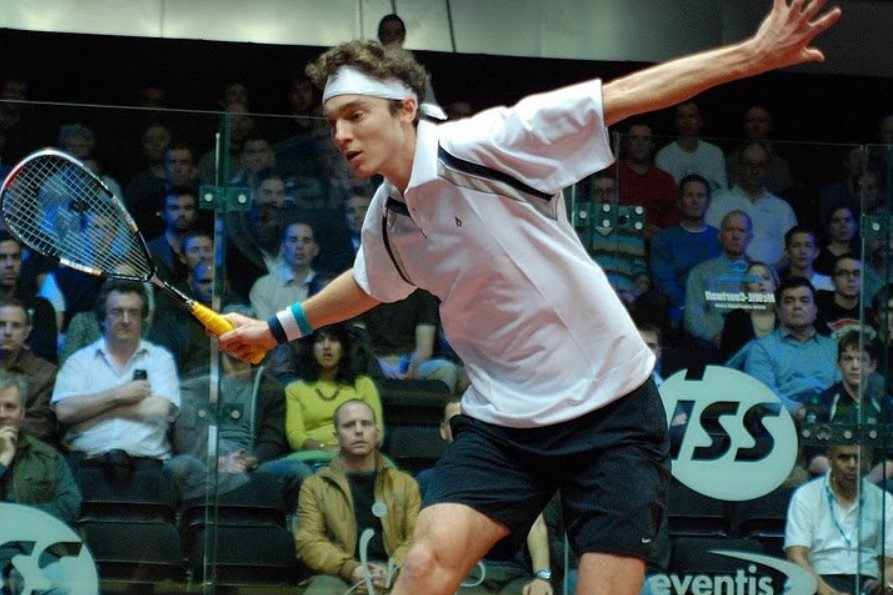 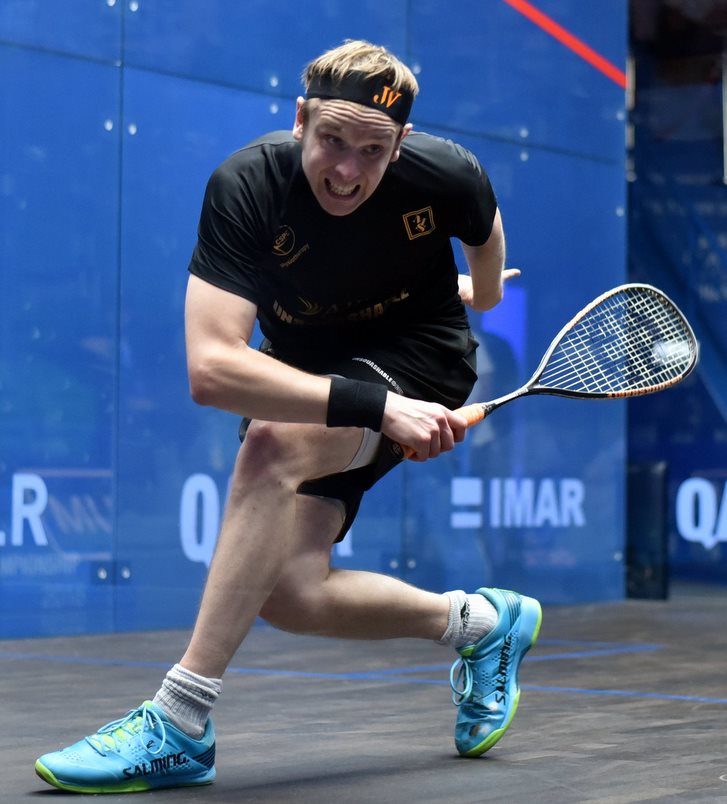 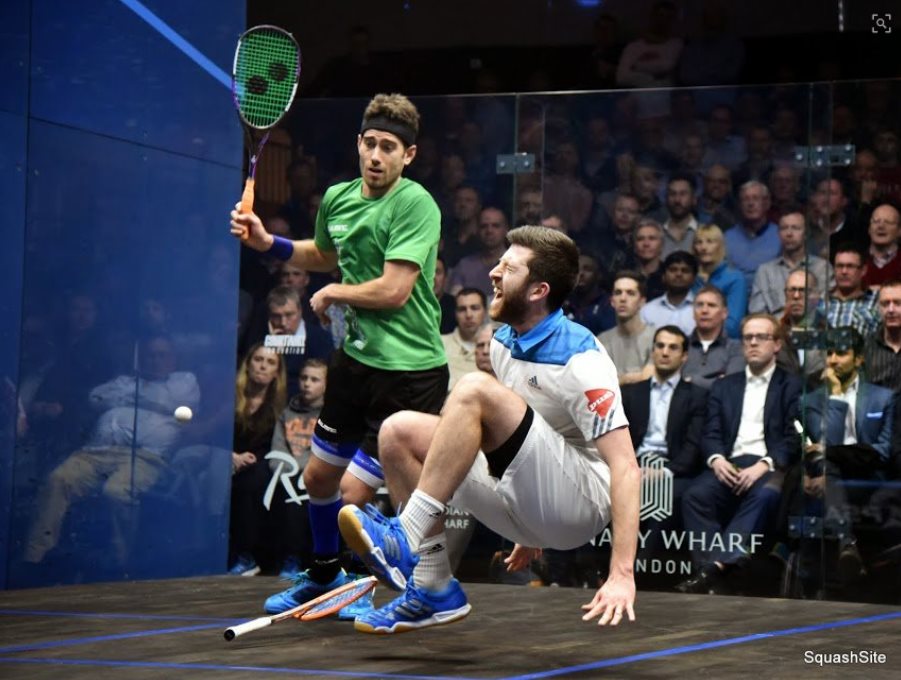 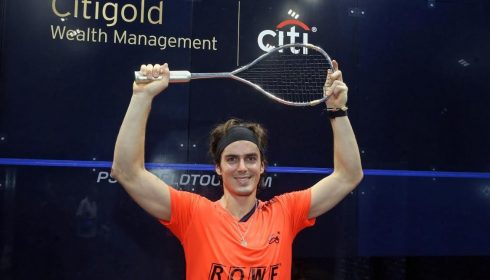 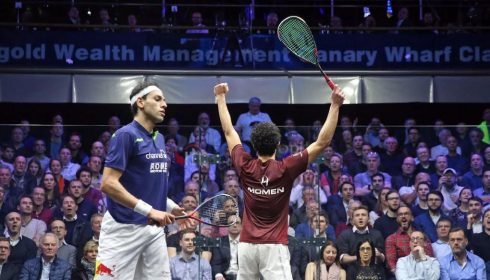 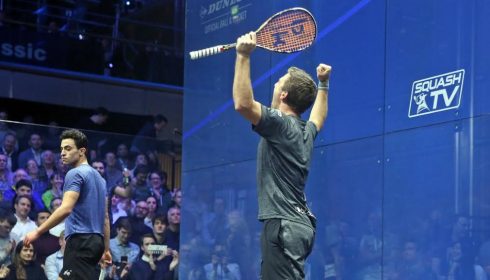