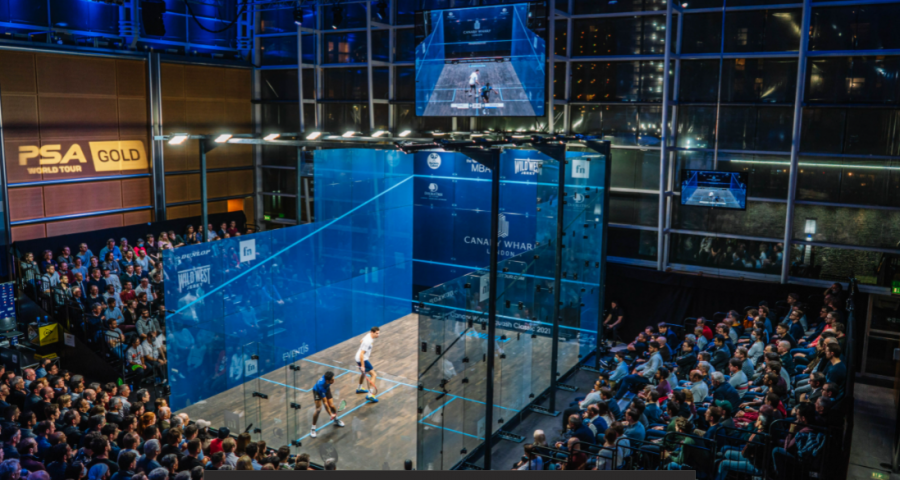 Paul Coll beat Diego Elias in straight games to avenge his defeat in the Qatar Classic final to move into his first Canary Wharf final.

“I had another great week up in Birmingham with my coach Rob Owen,” said Coll.

“We do a sharp week of hitting, getting my ball striking and movement where we want it to be. I always feel confident going into a tournament after having a good training block like that. I knew it would be tough tonight, Diego beat me three weeks ago, so credit to him for backing up and having another good tournament, it’s always so hard to do that.

“I was very happy to win that first, I didn’t start the best and he was controlling me, so it was good to go 1-0 up, got my length better and tighter and I’m just super happy.

“I wasn’t as happy with it tonight as I have done, I got a lot of good counter in that front backhand which is one of my favourite areas. He was holding me a lot tonight, I didn’t feel like my movement was fully timed but got myself in the match which I was happy with and played the big points well run the end. Few things I can work on for tomorrow and feeling fresh and ready to go.

“We’ve had some good battles in finals this year, another one tomorrow. I’ve got a lots of support from best friends and my coach here. I’m just in a good place this week, the crowd’s amazing. Make sure you get plenty of beers in you tomorrow night so you’re rowdy for tomorrow.

“I think that’s the way everyone wants to watch squash, its more entertaining and free flowing and comes down to good squash then. Me and Diego both play like that and we’re friends so it’s harder to block and it’s just better to watch so the more matches like that, the better for me.”

10-7 down in a nip and tuck first game, top seed Ali Farag recovered to claim the opener before dominating the next two games to reach his second Canary Wharf final in a row.

I had a clear game plan in mind, but it’s not easy to implement it against Tarek.

It was a matter of who got their game plan going first. In the first we traded blows a little and it went my way which calmed me down a little so it was easier for me to implement my game plan. In the second and third, I don’t think I’ve ever done it to that level against Tarek before.

It got in my head a little. Once he started winning points I thought that was that the turning point. It took a funny bounce off something so both of us thought it was dodgy but if it was him, I would have appealed as well.

I’m very pleased, believe it or not I was lucky enough to win a lot of titles across the globe but never on British soil. I’ve made semis here and the final, so I hope the trend continues. I hope I can go one further this time. It’s a joy to play on this amazing stage, in front of this amazing crowd. I can’t wait to play for you again tomorrow.

The format was three games of eight minutes duration and we finished with the very first drawn game in squash history when the second ended 10-10 in the allotted timespan.

Both players moved the ball around intelligently and Yusef found the edge with some brilliant flat nicks.

That set the scene nicely for two mouthwatering match-ups in the semi-finals.

We have two magnificent match-ups in tonight’s semi-finals. Ali Farag and Tarek Momen are both previous runners-up and are keen to collect their first Canary Wharf title. Victory tonight will take one of them one step closer towards that goal. Meanwhile, squash buddies Paul Coll and Diego Elias will be staging a repeat of the recent Qatar Classic final, which proved to be the biggest career triumph achieved by the young Peruvian.

As we return to best-of-five scoring, it will not be a surprise if both of this evening’s matches go the full distance.

All four quarter-finals were over in straight games, with Coll’s victory over Joel Makin the longest at 44 minutes.

It was fascinating to watch the drama unfold, with different styles on display in each of the four high-quality contests.

After Momen had won a tight opening game, he left the court early in the second with his racket hand in spasm after a self-inflicted injury. He returned after a regulation three-minute break during which he received treatment from PSA physio Derek Ryan.

Referee Jason Foster told him that if he needed more time to recover he had the option of conceding the second game. But not only did Momen choose to play on, he did so with total concentration and applied himself to the task of getting the job finished as quickly as possible.

Bizarrely, Asal elected not to chase one ball down as Momen began accumulating points, and you could sense from that moment that there was only going to be one winner.

After the match Momen admitted that he had suffered a similar injury before and was confident that it would not trouble him this evening.

As I entered the court to talk to Tarek, I glimpsed Mostafa grabbing his bag and rushing out of the building.

Last night’s victory, following a run of defeats to Asal (some of them in the most controversial circumstances), will give Momen a huge confidence boost going into tonight’s match against Farag.

The world No.1 said he was feeling on top of the world coming into the tournament, having missed Qatar following a shock straight-games defeat to Joel Makin in the quarter-finals of the U.S. Open.

After a solid training block back home in Cairo, he practised here in London with tonight’s opponent before his second round match with Iker Pajares on Monday. After a conservative opening game in which he found his rhythm and reacquainted himself with the Canary Wharf surroundings, Farag returned to the court in attacking mode and took the second game 11-2.

Momen did the same after losing his second game on Monday to Baptiste Masotti, blitzing through the third 11-1.

What’s so frightening for their opponents in the early rounds is the ability of the top players to switch styles and step up a gear or two when the situation demands a rapid solution.

Momen took 27 minutes to get past Asal last night and Farag required five minutes less to win an entertaining contest with Miguel Rodriguez. The Colombian dived around the court and hit some spectacular winners to entertain the crowd, but Farag methodically and efficiently went about the business of winning a squash match, working with phenomenal accuracy and retrieving some of his opponent’s best shots, all of this taking place at an incredibly high speed.

Paul Coll and Joel Makin served up what can be perhaps best be described as “traditional” squash, patiently building rallies and waiting for the loose ball to attack. Former British Open champion Lisa Opie, who was sat next to me at courtside, said it felt like she was being transported back to the 1980s.

She didn’t mean it in any derogatory fashion and said that both players reminded her of the relentless pace, pressure, power and precision that Jahangir Khan used to crush his opponents while winning 10 British Open titles in a row.

These are the building blocks in any ambitious squash player’s DNA, and Coll has found more confidence in his increasing ability to engineer winners at the front of the court.

He plays a high-paced, accurate, aggressive brand of squash that he hopes will help him reverse the result he suffered against Elias in the final of the Qatar Classic.

The game is now faster than ever, the players are fitter than ever, and we witnessed a superb battle between Elias and Gregoire Marche. The Frenchman led Elias by two games to love in the Qatar quarter-finals and the Peruvian knew that he was in for another difficult match.

Marche is not far off the world top 10 and his speed around the court is simply breathtaking, as is some of his shot-making. However, he will be disappointed with the tins that cost him dearly last night.

Elias moves smoothly for a big guy (he’s 6ft 2in) and delivered plenty of killer shots of his own.

Last night we enjoyed watching eight brilliant squash players, each with his own different style and personality.

Tonight we are down to the last four, and I find it impossible to call either match.

What I can confidently predict is that we will be treated to another fantastic evening’s entertainment in one of the world’s greatest squash venues.

The fun starts with a Junior Challenge at 5.30pm between Jonah Bryant, the national under-17 champion from Sussex, and Yusef Sheihk, the England under-17 No.4 from Essex.